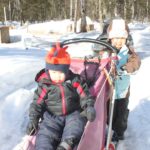 On Tuesday’s show, The Part-time Single Parent, Amanda, Brooke, and Scott highlighted some of the positive aspects of being a part-time single parent.  That got me thinking about how time away from each other can be healthy. Take this past weekend.  Thomas wanted to ref a Taekwondo tournament.  I couldn’t pass up a rare invitation to dog mush in a remote area of Trapper Creek. In the past seven years living in Alaska, I’ve always chosen to put aside my wild impulses and wait for my man to take … END_OF_DOCUMENT_TOKEN_TO_BE_REPLACED

Tomorrow, Scott Frickson, whose daughter Jada is a month younger than Ethan and his best friend, will be on the "Part-time Single Parents" show.  His wife, Keilah, and I have served as substitute spouse when our husbands were out-of-town.  She would watch Kyra and Ethan when I had to teach and make dinner for all of us.  I would watch Jada so Keilah could go out for a run.  Sometimes, if both our husbands were travelling at the same time, we would have a sleepover and scrapbook together while … END_OF_DOCUMENT_TOKEN_TO_BE_REPLACED 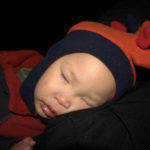 I had seen what might've been the Northern Lights on only two occasions: October 2001, the evening Thomas proposed to me in Denali, and August 2005, when Thomas and I took turns rocking newborn Kyra to sleep and poking our heads out the door of our Eagle River home. Both times, the sky teased us with a distant glow, the kind that a Wal-Mart or obscured moon might emit. Both times, I wasted all my time behind the lens, ending up with only the weight of failure. Failure to photograph this elusive … END_OF_DOCUMENT_TOKEN_TO_BE_REPLACED

Day 10 of Kyra’s spring break.  The sun pierces through our ceiling to floor windows, heating up the air between the three of us seated at the dining table.  We squint, barely able to make out each other’s features.   Ethan growls.  He’s angry that I’ve interrupted his attempt to “save the world” for something as frivolous as lunch.  He smashes a meatball in each hand to juice. Kyra sips on her milk as she tries to catch her breathe.  She had just run up and down the stairs several times, … END_OF_DOCUMENT_TOKEN_TO_BE_REPLACED

Our 6:30am alarm has not rung yet when I hear a pitter-patter of feet crescendo into our bedroom.  Ethan and Kyra giggle as they climb under our covers and arrange themselves on each side of me.  They compete to plant the most kisses on my cheeks.  Pudgy arms grab my face and ears.  Their bodies pressed like cellophane against mine. Kyra says, “I love you, Mommee.” Ethan says, “No, I love you Mommee.” I manage a groan, since I had a productive writing session last night and only got two hours … END_OF_DOCUMENT_TOKEN_TO_BE_REPLACED

Lately, Ethan refuses to allow the family to play a Wii or PS2 game in peace.  Instead of running away as seen in my first blog post, Parenting with Avatars, he now has enough strength to engage the girls in full combat.  He clings to my leg as I try to race down Kyra on the Wii Active Sports Obstacle Course.  He tackles Kyra and tries to yank the Wii controller out of her death grip. If I strap the nunchuk onto his leg and teach him what buttons to push on the controller, he gets stage fright. … END_OF_DOCUMENT_TOKEN_TO_BE_REPLACED 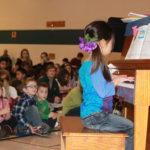 Last Friday, Thomas and I received an email from Kyra’s school announcing a Brown Bag Concert series every day the following week.  I noticed that four of her classmates were performing.   As we brushed our teeth that night, I remember telling Thomas that I felt terrible.  First, I was clueless about whether there was a sign-up sheet or how students were selected.  Second, I had started to teach Kyra piano for about a month fairly informally on the weekends.  And most of that time, we would get … END_OF_DOCUMENT_TOKEN_TO_BE_REPLACED

Last night, Kyra busted me for tossing a bright blue conchiglioni (giant pasta shell) she painted at school. “Mommee, why did you throw my art away?” I had always dreaded the day my daughter might ask me this question.  According to reporter Michael Tortorello, I am a hoarder, not a chucker.  I framed the first time she ever drew a circle, a car, our family.  We saved every doodle from Kyra’s first month in Kindergarten when she was obsessed with drawing hog creatures from the iPhone app Angry … END_OF_DOCUMENT_TOKEN_TO_BE_REPLACED